It’s taken me more than six months to contemplate starting this post.  This is not for any deeply emotive or shocking reasons.  What I am writing about is not particularly important, nor earth-shattering.  It is certainly self-indulgent and that doesn’t sit particularly comfortably with me, but that may only be partly the reason behind my hesitation.

For the past year, I have had a small photography site lurking in the depths of the internet.  I am unsure as to exactly why I built it, but suffice to say I’ve only shown this site to a few people.  Unsurprisingly, the feedback from my consistently supportive friends and family has been overwhelmingly positive.  They all said I should publicise the site a bit more.  It is after all, what I do for a living.  Or at the very least, an extension of this.  Sort of.  Maybe.

The site is still very much a work in progress and is mostly drawn from my personal and professional travels around North America.  The sets are not large, but this is deliberate.  I have just posted images to which I have a particular response.

With that in mind, here it is:  www.oneframeintwentyfive.co.uk

That a cameraman should also take still pictures is in no way surprising.  Indeed, it’s positively encouraged and expected.  Particularly with the current convergence of technologies in both fields.  However, for years I have had a reticence when it comes to showing any stills work.

As a young producer, a director whom I greatly admired – and indeed still do – confided in me that he was wracked with a sometimes crippling self-doubt.  Before every shoot he would have a moment of panic during which he would fear ‘being found out’ and would question how and indeed why he was in the position he now found himself.  Indeed, it was certainly heightened in an industry not known for praise or indeed a basic framework into which one can fit and can find the approval and assertion that ‘yes, congratulations you are now a [insert whatever title you want here]‘.  We discussed that, not only was this feeling natural and commonplace, but it was one that few of us would actually want to do without.  We might know we’re good, we just don’t believe it.  Professionally it makes us push to do and be the best we can be, every time, without fail.

However, when it comes to stills photography and more specifically sharing said work, this feeling has been difficult to overcome or at least sublimate into some sort of action on my part.  Until now.

I think I have an interesting relationship with photography.  I adore it.  I lionise it.  I devour it incessantly.  In many ways, I sort of fear and revere it.  I am frankly a frustrated photojournalist.  My heroes, for the want of a better word, are all journalists and photographers.  Filmmakers came much later.

Perhaps the reluctance to show any of my stills is because I fear being judged on my stills work, both on its own merit or as a passing critique on my moving image day job.  Perhaps it is because I see still images as being a far more personal and exposing expression of my ‘eye’ whatever that may be.  Perhaps it’s because, as I’ve never touted myself as a taker of stills, I don’t necessarily see photography as part of my work as a moving-image cameraman, but feel that I really should.  I don’t know.  Frankly, it is something I need to get over.  Hence this post and oneframeintwentyfive.

I took pictures long before I picked up a film camera of any sort.  Growing up, my parents didn’t have a Super8 or handheld camcorder.  They still don’t.  I was given an old Praktica SLR of my father’s towards my early teens and encouraged to go out and play.  It was gloriously manual and so robust that it survived the rather cack-handed attentions of my younger self.  In many ways, it was an unofficial apprenticeship in photography and filmmaking – learning by my own mistakes when it came to film and shutter speeds, apertures, compensating for backlighting and so on.  Growing up in a small Scottish town, the inevitable agonising wait whilst my developed rolls were sent off via the local chemist for processing (which was even longer since I preferred black and white) led me to take courses and experiment with developing my own negatives.  I entered a few competitions and exhibitions and did reasonably well.  In one case on account of my age, being sent the most fantastic National Geographic photography book in place of the publicised alcoholic reward.

Then I stopped taking pictures.  I don’t know why.  I just did.  For years.

I have never been one of those people to take pictures on holiday or on nights out as mementos.  I don’t think I have any pictures of my time at university or art school.  This is not a reflection on the joy or otherwise of such moments.  Rather, I have always seen photographs as something ‘other’ than mere aides-mémoire.

Interestingly, my sometime boss and colleague, Sam Maynard has spoken and written on his own relationship with the still image. He talks not of photography but of trophotography; “[taking] pictures to capture places as trophies and return to friends and family with evidence of [ones] independence”.

Recently, I took an afternoon walk to the top of a decent-sized peak in Alaska.  The view over the peninsula beyond was staggeringly beautiful with the light constantly changing. Despite carrying my stills kit, I found myself reluctant to use it.  I justified this by saying I didn’t want to commoditise the moment by attempting to capture it.  That experience wasn’t just about how it looked, but also how I felt about my relationship with that place at that particular moment in time.  This I knew, I wouldn’t be able to translate to a still image which I felt would just be a mere trophy saying ‘look, I was here’.

Perhaps those photographs I do take are evidence of my independence of thought rather than place.  For example, I find Las Vegas a very strange and ultimately uncomfortable place.  However, photographing it in black and white allowed me to see the imperfections, the cracks hidden by blinding lights, that I couldn’t see in colour which ultimately allowed me to reconcile and cope with how I felt being there.  Perhaps those pictures are an exemplar of my own emotional independence from the place.  It is possible that this emotional connection I have with my stills has been why I have been reluctant to share them until now. 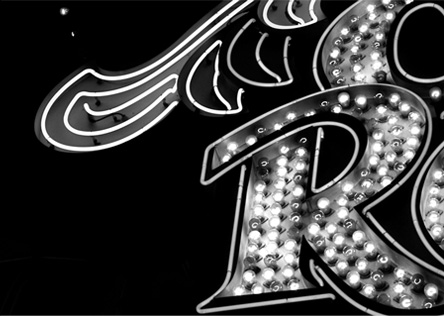 Growing up, I was fascinated by Harold Evans’ seminal book, Pictures on a Page: Photojournalism, Graphics and Picture Editing.  Evans methodically and evocatively picks through examples of how selective cropping and post-production of images significantly emphasises, or indeed alters, the impact of still images.  The same can be said of moving image, indeed perhaps more so.  The liberties we can (and often do) take in making reality ‘fit’ during the post-production process in moving image can be drastic.  However, by and large I am required to take an ostensibly neutral standpoint, at least at the level of acquisition.

It wasn’t just the impact of the choices a photographer or picture editor made that fascinated me.  On the back panel of Evans’ book, there is a characteristically haunting picture by Arthur Fellig, also known as Weegee. 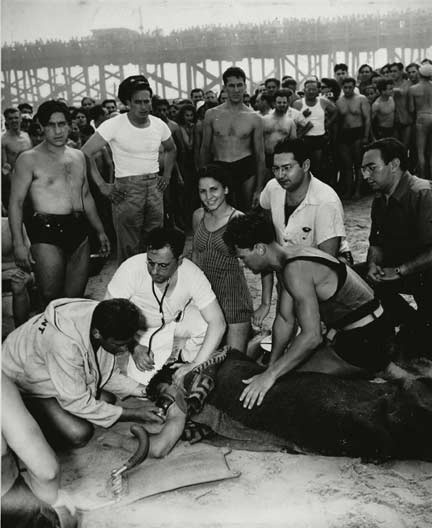 The blurb reads:  “her fiancé lies at deaths door after being rescued from the sea.  She smiles because she saw a press cameraman and knew her picture was going in the papers”.

Not only does Evans examine how photojournalism aims to reflect the world, but also how it fundamentally alters it.  This is not merely through choices of composition, cropping and processing by the photographer, but most importantly and crucially by the very processes of photojournalism as an affecting agent at an event.

This dual influence has always been a source of fascination.  Can a rapporteur, whether through still or moving images, capture ‘reality’ whilst avoiding the pitfalls and biases of not only their own choices of how to frame an event, but also through some sort of quantum theoretical observer-expectency effect caused by their own presence?  In short, I don’t think we can.  Trying to get round, or at best acknowledge the effect documentary filmmakers have on their subjects, is an ongoing endeavour exemplified in some of the best reflexive or authored pieces of documentary filmmaking, but even those approaches fail to fully deal with the questions over what reality is being represented.

However, herein lies the beauty of photography and photojournalism.  To me its objective strength has always rested in its explicit subjectivity.  The subjectivity of the photographer is there plain in the frame, for us to literally see.  “This”, the photographer says, “is what I present to you as reality”.  Photography doesn’t attempt to give the viewer a real-time, moving, high-definition window through which to see the world unfold.  It is a mere snapshot of a moment, literally a split-second.  A moment in time is just that, one moment only.  To give it context, meaning and promote some sort of reaction in the viewer, the auteur must be subjective in their choice of composition, emphasis, post-production and so forth.  Crucially though, all are there to be seen unhidden by the conventions and language of a medium such as television.  In a photograph you can see the decisions the photographer has made in trying to communicate their representation of reality.  To me, that apparent paradox between the photographer’s often objective aim and subjective actions are what makes photojournalism so powerful.

Naturally, I don’t believe that this is the case with all photographers, nor do I dodge the accusation that there have been those who have certainly overstepped the mark where subjective decisions within a wider objective context are delineated from the production of out-and-out propaganda.  I have had several debates with friends, many of whom are real photographers, about at what point ‘making a scene work for you’ becomes ‘manufacturing what you want’ in the context of photojournalism or indeed factual filmmaking.  The question of what is acceptable is one I think we have to keep asking ourselves in every context and every situation otherwise one minute we’re moving an object to get a cleaner shot, the next we’re planting soft toys at the scene of atrocities.

So perhaps that is my problem.  Perhaps I have been too emotionally attached to the photographs I have taken, in that they aren’t communicating events as with photojournalism, but rather exist primarily because they elicit an emotional response within me.  Technically, they can always be better but maybe it’s because they are so personal that it has taken me until now to share them with anyone who cares to look at them.  Regardless, it’s about time I got some opinions.

So please, do have a look.