I’m currently sitting in the south of France.  The sun is shining.  The air clear and welcoming.  I am fortunate to be able to spend time here.

This time last week, I was in Gaza.

Within 30 minutes of landing in Tel Aviv, the first rocket alarm went off – a stern warning in Hebrew, followed by a curt message in English ordering those just landed to head to the shelters.  Most people trudged obligingly in the signposted direction, a few stood rooted to the spot crying uncontrollably, apparently frozen by fear.  We were unable to fit into the first shelter.  It took five minutes to get to the next one, by which time we were told the alert was over and we could go back to our private vigils at the baggage carousels.

Rockets of any type are undoubtedly terrifying.  They are indiscriminate.

As we crossed from Israel into Gaza, we saw fire coming from both sides.  The Erez crossing to/from the Gaza Strip is far from user-friendly.   A labyrinth of turnstiles that must be negotiated are made all the more difficult by the copious number of cases carried by a television crew.  Once through, an automated metal gate grinds shut behind you leaving you to the eery limbo of the 1km long chicken-wire tunnel walkway to Gaza. 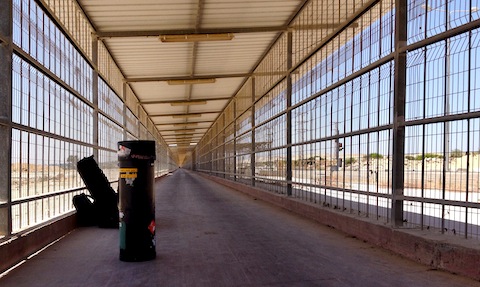 Forty-eight hours after we passed through, Hamas all but abandoned their side of the crossing due to shelling and the first Israeli had died as a result of a mortar fired near the border.

There are no sirens or shelters in the Gaza Strip.  When we arrived in Gaza City, the IDF had not yet launched their ground-offensive.  However the situation was already dire for the 1.7 million inhabitants of this thin strip of land.  The bombardment from Operation Protective Edge had accelerated the developing humanitarian crisis, already acute after eight years of blockades by Egypt and Israel.  The water and sewage infrastructure is all but destroyed.  The heavily salty tap water is undrinkable.  The gentle lapping of the Mediterranean against the shoreline belies the 90 million litres of untreated sewage flowing into the ocean each day.  What fish that could be caught by Gaza’s fishermen are mostly out of reach – the waters too dangerous for any boat to operate.

After the bombing of the Gaza power plant, the ICRC estimate Gaza now has less than 20 percent of its already limited power supply. Hospitals – already dangerously short on supplies – feel the brunt.

A friend asked me if there was any logic to the current conflict.  I said I believed that whilst there were various causal explanations for this and every other surge in violence in the region, I saw little logic.  Rather, there is an anger and hubris from both warring sides with a civilian population systematically traumatised and destroyed as a result of being literally and metaphorically caught in the crossfire.  It’s nearly impossible to get any Gazan voice on camera denouncing both sides.  Indeed, at times, every voice can feel unrelentingly politicised.  However, those dissenting voices are there… and they are growing.

We try to make sense of these conflicts, not just for our viewers and listeners, but also for ourselves.

The Telegraph’s stark graphic representation of each of the 132 Palestinian children killed between 7 – 21 July 2014 is one of the most powerful pieces of visual journalism I’ve seen for a long time.

However, often the most memorable images of a conflict are the most harrowing.  Tyler Hicks’ pictures for the New York Times of the aftermath of the strike on the beach which killed the four young Bakr cousins has already become one of the defining moments of this conflict.

We cannot show many of the images and scenes we witness unedited on our news bulletins.  Often I wish we could.  Instead, we try to bring personal stories to life – micro-narratives that seek to explain the impact of the wider story.  Sometimes I worry we also concentrate on individual stories in part to salve our own emotional consciences.  A way of reminding ourselves that these are fellow human beings caught up in unimaginable horrors and that our noble motives of bringing such to the world’s attention, permit us to be professional voyeurs of extreme suffering and a conduit for consumption by those in front of a screen.  “Look,” we say “pay attention, for in another world – another life – this could be you and me”.  It has been said the only good thing about TV news is that it forces one to go there and to witness.  A 180-second television package has massive limitations, but we try to make these stories matter and relevant.  Hopefully, we had some success.

Several such stories will stay in my mind.  Some we were able to tell, some we weren’t. 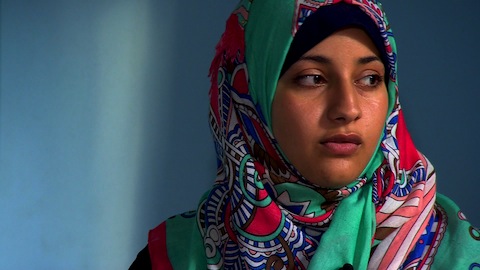 Stories such as that of the Khatib family – educated, articulate, recognisably middle class, ostensibly ‘people like us’.  The family sleep in one room at night.  They have already fled and lost one home to the decades-old conflict.  Their eldest daughter told us Facebook helps her to feel that she’s not alone.

Hamad, the man interviewed on the phone from inside Khuza’a.  A town of around 9 000, half a kilometre from the border and too dangerous to reach.  A deceptively quiet speck on the horizon, just out of reach, visible through the heat haze at the very end of my lens.  His voice breaking and desperate, automatic gunfire and shelling clearly audible on the line.

A solitary figure, walking from the front lines, crossing the eerily quiet streets of Abasan carrying a small plastic bag which we discovered contained a white shirt.  A shirt acting as a makeshift flag which he had waved above his head as he finally left after holding on for as long as he could in order to feed his chickens.  As he walked he said, gunfire erupted over his head and between his legs. 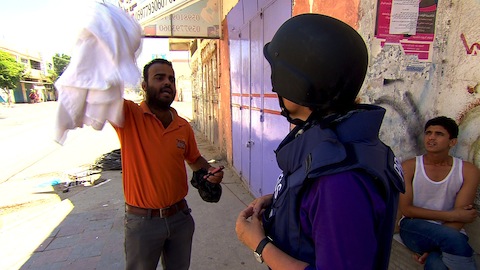 The children we saw everywhere.  Some boisterous, curious, wanting to play.  Many quiet, wide-eyed and shell-shocked.  Others – like the tiny baby dwarfed by the stretcher on which she was wheeled into the al-Shifa burns unit – terribly injured.  Far too many of them dead and dying.  For those children around six years old, this is their third experience of war.

The UNRWA-run school-turned-shelter in Beit Hanoun at which people cried out to us from the overcrowded balconies for water, only for us to learn it had been a hit a few days later as we boarded our flights back to the UK.  The circumstances of 15 deaths still being questioned.  (As I write this, the US has criticised the shelling of another school-turned-shelter in Jabaliya in which 20 lost their lives.  Last night the US agreed to provide the IDF with more ammunition).

However, most memorable for me will always be the story of Asmaa el-Helou.

When our team of Paul Adams, Grainne Harrington, Rushdi Abualouf and Richard Stacey arrived in Shejaiya with the ICRC/ Palestine Red Crescent convoy, it took several attempts to reach the site of Asmaa’s eventual rescue.  At first, small arms fire forced the convoy to turn around – the firing close enough for the distinctive ping of the bullets to be heard and the fragile ‘humanitarian pause’ in hostilities already hanging by a thread.  The extent of devastation meant that access to the worst hit areas was blocked.  A path only being cleared by the arrival of a large bulldozer. 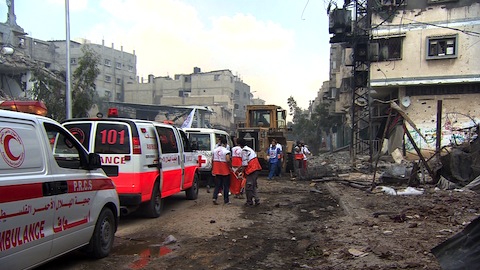 Incredibly, impossibly the emergency team managed to find Asmaa.  Her hand, pointing at us all from beneath the rubble at the far end of a crater, will remain one of the most enduring images for me of my time in Gaza.  What little we could see of the rest of her was terribly injured.  Nearby, there were packed suitcases lying amongst the mangled mounds of rubble that was once the family home.  After the missile had struck, her cousin Mohammed and others had been unable to move the enormous concrete slab which trapped her.  He told us that she pleaded with him not to leave her and called out to see her friend, Hanan one last time before she died.  Mohammed had to leave her.  He said he had to go to find help.  It was too dangerous to stay. 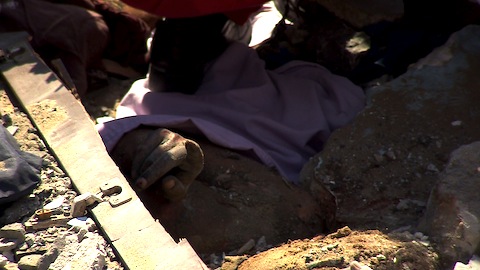 Her mother and father, her two sisters and two brothers, her sister-in-law, her two-year old niece and her twin six-month old nephews all died.  Their bodies are probably still there.  Since then, more terrible destruction has been wrought on Shejaiya.  It is almost the definition of post-apocalyptic.

We visited Asmaa in hospital.  She had 36% burns, her organs were severely damaged, but doctors were hopeful they had managed to save her most badly damaged leg.  Dr Ahmad al-Moghrabi said “she was lucky” and “a miracle”. However, his face told a different story – an acknowledgment of the grim realities of Asmaa’s future.  She died later that night.

The most striking aspect of my time in Gaza, was the humanity on display.

The effort taken to preserve Asmaa’s dignity during her rescue, was deeply moving.  When the Salam tower was hit and the precarious operation to recover a body trapped seven stories above the ground got under way, the care verging on tenderness taken to shroud yet another victim’s remains was profoundly affecting.

I saw no outbreak of looting or violence.  No breakdown in the social fabric.  We were met almost universally with generosity and kindness, whether it was the understanding of our need to drink water (albeit sparingly and discreetly) whilst others observed the Ramadan fast, or the lady who shared her electric fan with my colleague sitting outside in the sun as we were invited into their home to conduct an interview.  The stoning of the ICRC convoy a few days later which my colleagues witnessed, although undoubtedly shocking and wrong, was an overflow of the frustration many felt that even those who came to collect the dead were abandoning them.

Often the hardest thing about any deployment is when it comes to an end.  No matter how enjoyable or otherwise a job has been, the peripatetic nature of our work necessitates an often short, sharp emotional bump as we rejoin our home lives and attempt to pick up wherever it was we left off.  Few times can be harder than this.  Not only do we leave a conflict behind, but so too our colleagues and the stories we have told.

Jon Snow has written (and been oft-shared on social media) of the deep scars he feels as result of what he has seen during his time in Gaza.  Many of it “too terrible to put on the screen”.  I fear he speaks for many of us, and sadly many more of us yet to come.  The pack of journalists of whom he writes crossing back into Israel, included our BBC team.  We were late for our flight – one half of the outgoing team already delayed by 24 hours due to the border closure.  Everyone agreed the Palestinian family with the small baby should exit before anyone else.

We could leave.  We choose whether to go back.  The overwhelming majority of Palestinians in Gaza have neither choice.