For a couple of days last week, I was asked to shoot a feature for the BBC’s Sunday Politics programme with the lovely Giles Dilnot and Joanne Hilditch at the helm.

Being able to spend a bit of time on a feature was a welcome change from some of the faster turnaround stuff I’ve been working on of late. However, what was most enjoyable was having a production team who were willing to take a bit of a punt when it comes to an aesthetic approach.

The increasingly squeezed budgets and time constraints on programme-makers are well documented, discussed and maligned. Often this runs alongside the growing pressure on the same teams to create a finished product with a strong ‘look’ or (frequently needlessly in my opinion) visual and narrative devices linking the whole thing together.

So for this piece on the upcoming roll out of ‘universal credit‘ to the UK population, Joanne had decided that she wanted some linking sequences of crowds and activity in central London utilising the ‘miniaturised world’ effect made possible by shooting with tilt and shift lenses.

Now, I know this effect isn’t exactly new and there are countless excellent examples of tilt and shift kit being used to be found all over the net and television, but the reason why I said I applaud the team’s willingness to take a risk was that until the start of this shoot, I had never previously tried this technique in anger. To let a cameraman loose with the caveat “you know this might not actually work that well, or indeed at all, don’t you?” ringing round the room and still remain relaxed in the face of a rushing deadline, takes some real faith.

Obviously, the effect can be achieved relatively easily in post-production if I had chosen to shoot the whole piece on the PMW-500 used for the rest of the project. However, with severely limited edit time and budget, I really wanted to achieve as much in camera as possible. 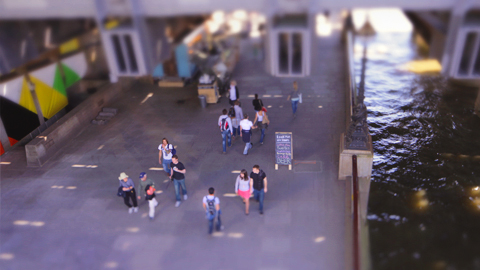 So, armed with a 5DmkII, a lovely Canon 24mm TS-E f/3.5 from the brilliant Catalyst Cameras (HT to Daniel Haggett for the recommendation) and my Giottos 9351B tripod and MH5011 head, off we went. Now, I won’t bore you with the ins-and-outs of how to achieve that shrunken world effect, especially since I’ve already admitted I am a relative novice in this technique and there are loads of great tutorials to be found. One thing I do know, is that height above the subject is rather important, increases the effect and there’a a fair bit of trial and error involved.

A brief digression. BECTU and other unions have repeatedly raised concerns about the seemingly overzealous targeting of crews going about their business in UK cities by police and other security personnel, with several instances (erroneously) citing anti-terror laws. As part of a similar trend, I and others have noticed what can be described as the increasing privatisation and restriction of (nominally) public spaces for photographers and film crews, amateur and professional. In short, the growing prevalence of the “excuse me, Sir you can’t take photos here” interruption.

To that end, a massive and wholly sarcastic thank you to the several security staff in ill-fitting suits from various well known London landmarks who took great delight informing me that my tiny tripod was a security and safety risk and therefore forbidden on their immediate surrounds. I hope you had a great day. 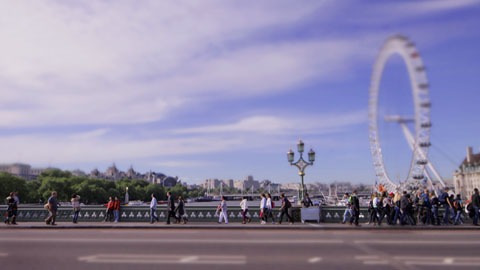 Despite several moments of unwanted and unwarranted attention, we did manage to get some fairly decent elevated positions – the Giottos’ extendable and pivotable neck really helped achieve a few extra inches when required. As well as elevation, the second trick in achieving this effect is to open the aperture as wide as possible and the 5D’s great ISO range really came in handy. Each set-up was shot at 1f/s using Magic Lantern’s intervalometer function. Rather than shooting with the DSLR’s video function (and thus providing the editor with a little more latitude in terms of speed ramping later on), I went for a stills sequence approach as I felt this would give even greater freedom when it comes to correcting any exposure and stabilisation issues that invariably arrive during timelapse shooting…especially when the technique is a bit of a new one to the person wielding the kit! Shooting at a 5616×3744 frame size also meant that there was over 65% of leeway when it came to reframing and would allow for any digi-rostrum effects in the final edit.

It’s also worth mentioning that I shot using the Technicolour CineStyle image profile which I’ve found great for producing a highly gradeable output for post in the past. However, given more time I would have loved to play with some additional settings.

Over the course of two days, we shot around ten different set-ups and hopefully they brought a little bit extra to Giles and Joanne’s piece.  Thanks to them both for taking a punt.  Sometimes it works.