Recently I’ve been obsessing about maps.  Actually, that’s not a recent development as I’ll freely admit that my relationship with cartography can border on the fetish at times.  Other than visiting the British Library’s Magnificent Maps exhibition (more of which at a later date, but is indeed magnificent) my attention has been taken up with work on a treatment for a project that is attempting to reinterpret and develop a map into an interactive film narrative thingy…with a bit of observational documentary thrown in for good measure.  Ok, that sounds a bit wordy, but that’s the best way I can describe it at the moment.  If it comes off, I will write more in the future. 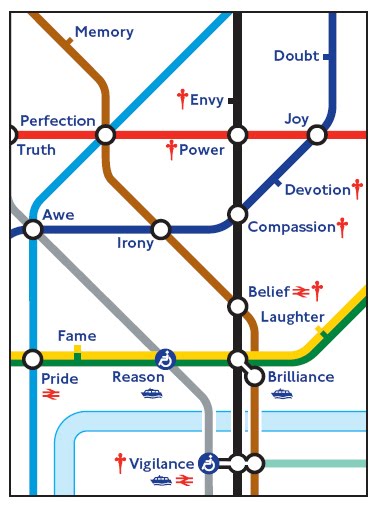 For the moment, a brief mention to Barbara Kruger’s new cover for TFL’s tube map which will undoubtedly remind any Tate Modern patron of Simon Patterson’s 1992 work, The Great Bear.  It’s not my favourite tube map cover, but I quite like it.  If not just for the potential to create confusion.

Mind you, should I be concerned I spent several months working from Reason looking longingly out the window at Fame whilst Brilliance was far behind me, out of sight?