Plastic Fantastic: shooting from the hip

Ok, I’m going to start with a slight rant.  Not one that is large, or surprising or even eloquent, but rant I shall.  I’ve always been a bit wary of powerful one-click-and-you’re-done plug-ins for postproduction in film and stills.  Hardly a fortnight goes by without enduring a showreel with the same animated text template or some Super8 leader-cum-transition splattered liberally over someone’s work to give it the latest look du jour.  I was always taught to view the online editing process in the same way as theatre lighting – if it’s good, no one should notice it.  The same goes for camerawork, direction, in short, everything.  As pre-installed video and image manipulation software becomes more advanced and video production capabilities continue to be increasingly democratic (and that’s no bad thing), I’m still a firm believer in the subtle and unique touch of a professional rather than the blunt thud of the latest filter or add-on.  I’m more a ‘unique blend of subtle herbs and spices’ and less of a ‘large dollop of ketchup’ man.  Call me a snob.  You’re welcome to.  I probably am.  And yup, I know this isn’t really a new argument, if it is an argument at all.  I’ve just seen too much of a bad thing.

All that said, I do love playing with plug-ins and apps for the hell of it, especially those on the iPhone.  Now, we all know and love Synthetic Corp’s Hipstamatic which lets your choose your lens, flash and film from a number of options and turns your ordinary snaps into arty, analogue piccies.With the whole retro is in idea in mind, Red Giant’s much touted and talked about app, Plastic Bullet is the newest distraction in my apps folder.  Again, the emphasis is on making the digital more analogue, but this time the end result is left to the algorithms of fate.  Put it simply, it is an app that changes any picture you’ve taken with your iPhone into a beautiful work of Lomography.  Think weird, lurid colours, uneven saturation and luminosity, vignetting, altered focal points and you’re pretty much there.  If you don’t like the first four options the app creates for you, then refresh the image and another four will appear.  The fact the app saves the original photograph (if taken from your camera roll) as well as your saved LOMO’ed images, is a nice touch. 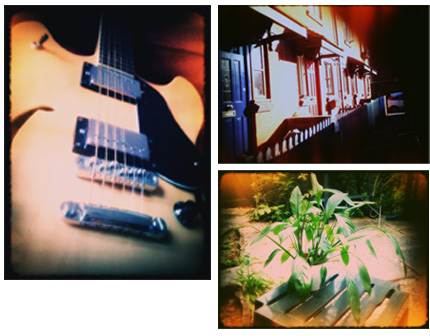 So what is Lomography?  Well, the story goes that in the early 1990s a couple of Viennese students discovered the LOMO Kompakt Automat (or Lomo LC-A) camera and started playing around.  These small, cheap, mass produced Soviet wonders introduced a randomness to the resulting pictures and the Lomography movement was born. As the initial craze quickly grew into an artistic movement, the founders established the 10 Golden Rules, the most encouraging I would argue was Rule 10: Don’t worry about any rules.  With this, the movement became a philosophy embracing randomness, artistic freedom, the active relinquishing of control, the integration of narrative into everyday life and vice versa.

As artistic, pop and consumer culture becomes increasingly obessed with all things retro, there’s no wonder apps like this are so popular.  That and the fact they make your pictures look like you know what you’re doing.  Of course, the notion of reclaiming the pleasure of the analogue world’s happy accidents in an increasingly digital and manipulated world is perfectly timely.  That said, the irony that Lomography’s end results can be emulated using a mobile phone is quite evident, but then for purists of any art the beauty, skill and pleasure will always be far more in the process than the end result.