So, the World Cup has kicked off, we’re in to the second round of matches and frankly the spectacle is keeping me sane as I tackle the mounds of paperwork that have been neglected in the last few months.  In truth, I’m much more a fan of the oval ball game but I’ll take wall-to-wall coverage of South Africa’s tournament over Cash in the Attic any day.

As my pre-paperwork procrastination continues, I came across Rudd Elmendorp’s latest dispatch from Tanzania about mothers in Tanzania opening their own bamboo workshop. 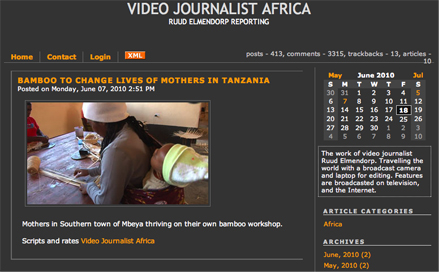 Now, in the hoo-ha surrounding the football, broadcasters (and in particular the BBC) are airing programmes extolling a refreshed (read: more positive) view of Africa, with Dimbleby The Younger’s An African Journey an excellent example.  As someone with a deep love of the diverse continent (only a comparative fraction of which I have experienced), it’s great to see a thawing in the hidden but still evident post-colonial ‘Africa-as-a-single-country’ (sic) permafrost I feel can underpin a lot of stories about Africa.

Amidst the optimism however, we shouldn’t lose sight of the great investment that many African countries still need from the developed world.  The plethora of statistics are familiar, but it’s important to remember the broad state-focussed headlines:

According to the 2009 Failed States Index of the top 15 most failed states, 10 were African and only a handful across the entire continent weren’t classed as ‘critical’ or ‘borderline’.  Even Ghana, ranked at 124 on the list of 177 and the least failed African state is still seen by some commentators as failing to live up to her earlier potential and promise.

In addition, of the 40 countries potentially eligible for the admittedly not-uncontroversial Highly Indebted Poor Countries (HIPC) relief from the IMF/ World Bank, 29 of them are in sub-Saharan Africa.

Whilst South Africa still has its problems, it is rightly held up as a shining example in some respects of what many African countries can become…indeed, often by other African countries themselves.  Indeed, whilst I worked in Ghana, many of my colleagues saw not being on the HIPC list as one of South Africa’s crowning achievements.  Part of this was the perceived level of self-determination evident in South Africa that can be muted in many states reliant on didactic, outside aid.

So, whilst the media continue to look through an increasingly clearing lens at Africa thanks to the spotlight the World Cup affords and the mainstream media increasingly carries stories shaped by native African narratives rather than our Western preconceptions, here’s hoping this can lead to a more balanced opinion of the continent.  If this in turn leads to an understanding that aid too is about hearing what African voices say rather than top-down Western charity, maybe more countries can be helped to work towards taking greater steps in fulfilling their potential just like South Africa.