I recently got an email from a sixth form student asking for me advice on how to get in to the media work and ‘do what you do’.  Now, putting aside for a moment the fact that sometimes I’m not even sure what it is I do and that defined roles in our industry are changing so quickly, the email filled me with some trepidation.  The fear came from the prospect that I might actually be qualified enough to have any advice worth passing on to anyone starting out… especially in the current climate.  Undoubtedly these are tough times for most if not all of us and personally 2010/11 will go down as the Year of Spectacular ‘Almost’ Projects, and the daunting prospect of having to start out now may have been enough to put me off if it were me.  However, I get a few such emails each year and make a point of answering.  I remember writing similar letters when I was a teenager and it always meant a lot when I got a response.  So I started thinking about what sage words I could impart.

Now, I won’t go into what I wrote, but I was reminded of a few wise words I received over the years.  A variety came to mind such as the film producer who insisted that when things get tough and we become slightly too obsessed with staring at our own navels, one would be wise to remember that “it’s only fucking television” or the foreign correspondent who insisted that you should always be prepared to be tear-gassed in France, no matter when and for what you were there.  The latter advice I still can’t help to remember when visiting the in-laws.

However, I thought the best piece of advice I could offer was one found on a print by the designer Anthony Burrill.  Although Anthony works across a range of media, he is perhaps best known for his beautiful and simple letterprints using witty phrases and bold typography.  I loved his recent work for charity called Oil and Water Don’t Mix which was made using leaked oil washed up on the Louisiana coast as a result of the BP disaster in the Gulf of Mexico.

The Burrill print that that hangs in my office at home, is perhaps once of his most well-known pieces beloved by many arty and not-so arty types alike.  I think it’s brilliant. 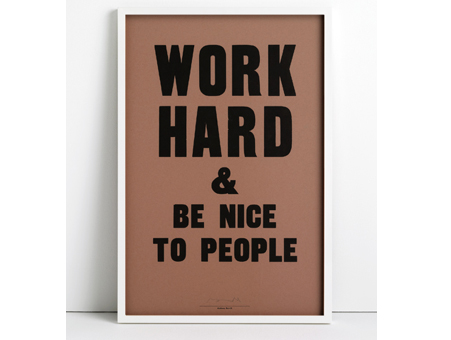 I can think of no better advice.